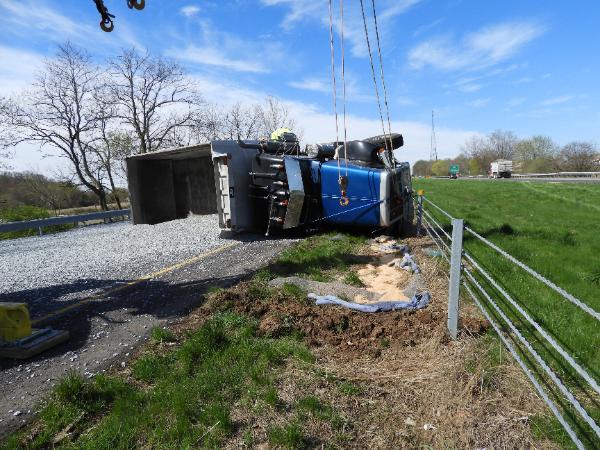 Contacted by the Pennsylvania State Police Avondale Barracks requesting us to respond to the Route 1 Bypass
Northbound north of Route 896 in the area of mile marker 10.8 for an accident involving an overturned dump truck that
had spilled it load of stone on the roadway and had a fuel spill.  Based upon the information we were given, we
immediately dispatched two of our heavy duty sliding rotator recovery units, our skid steer loader and street sweeper to
the scene.  Additionally, we contacted Null’s Recovery & Site Restoration to respond to the scene with one of their
Incident Response Units, and two of their roll off dumpsters.  The skid steer loader and street sweeper were loaded onto
one of our rollbacks to be transported to the scene.  One of NR&SR’s roll off dumpsters was loaded onto one of our
rollbacks for transport to the scene.

Upon arrival, a Peterbilt four axle dump truck was found to have been travelling Northbound on the bypass when it was
involved in a collision with a Toyota Yaris.  Both vehicles suffered significant damage from the collision.  The Toyota
came to rest in the center median against the cable barrier.  The dump truck continued north, overturned onto it’s
passenger side and came to rest blocking the roadway with the front end of the truck against the cable  barrier in the
center median.  The truck had spilled it’s load of stone over both travel lanes and both shoulders.

Our skid steer loader immediately went to work to clean a majority of the stone that remained in the bed of the truck out
of the bed.  NR&SR was requested to address the fuel spill.  One of the rotators set up on a work platform in front of the
unit.  It’s boom was slid to the rear and rotated clockwise.  Rigging was connected to the front of the truck, the truck was
lifted and rotated back onto the roadway so that it could be uprighted without hitting the cable barrier.

While this was being done, NR&SR worked with our skid steer operator to clean up the spilled load of stone from the
roadway and load it into their roll off cans for transport from the scene.

The second rotator set-up on a work platform beside the truck.  Rigging was placed under the truck’s bed at the front
and rear of the bed.  This rigging was connected to the truck’s frame.  The rotator hooked to the rigging and prepared
to lift the truck back upright.  A strap was placed over the top side of the dump truck and connected to one of the
auxiliary winch lines on the rotator to control the landing of the truck as it was uprighted.  The dump truck was slowly
lifted back to an upright position.

Once all of the stone that could be cleaned up utilizing the skid steer loader’s bucket, the street sweeper was utilized to
sweep the remaining stone and debris from the roadway.  We assisted NR&SR with cleaning up the fuel and oil that had
leaked from the truck.

A HUGE THANK YOU TO THE UNION FIRE CO. #1 OF OXFORD,
WEST GROVE, BART TOWNSHIP,  AVONDALE, AND OTHER FIRE
POLICE UNITS WHO HELPED WITH TRAFFIC CONTROL ON THIS
INCIDENT! AS ALWAYS, YOUR HELP IS GREATLY APPRECIATED!