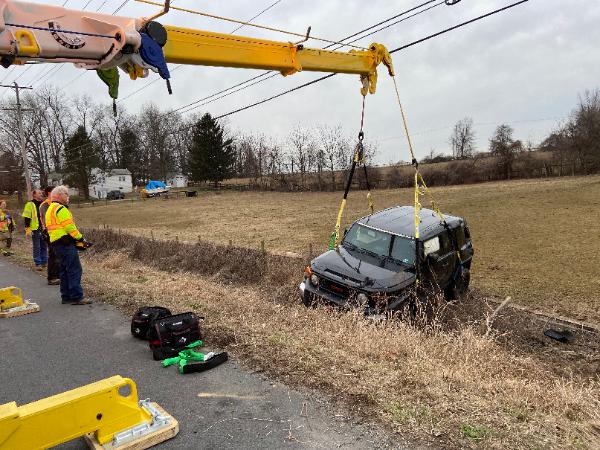 Contacted to respond to Route 41 north of Hood Road for a Toyota FJ Cruiser that was off the roadway after a motor
vehicle accident.  We were advised that the vehicle was over the embankment, overturned, on top of a fence and storm
water culvert.  Based upon the information from the scene, one of our long reach sliding rotator recovery units and a
rollback were dispatched to the scene.

Upon arrival, the FJ was found to have been travelling southbound on Route 41 when it lost control, crossed the center
line, went over the embankment, overturned, and came to rest on it’s driver’s side in the ditch on top of a fence and a
culvert.  There was a strong odor of gasoline in the area however no visible signs of leaks.

The rotator was set-up on a work platform and rigged to the vehicle.  Straps were placed through the wheels of the
vehicle.  The rotator then lifted the vehicle straight up off of the culvert and uprighted it in mid air back to an upright
position.

The FJ was then set onto the awaiting rollback and secured via a four point tie down.  The vehicle parts were picked up
from the scene.  The rigging was removed from the vehicle, the rotator was returned to travel position.  The FJ was
transported from the accident scene to Null’s of Cochranville.

A HUGE THANK YOU TO THE COCHRANVILLE FIRE COMPANY FOR THEIR HELP WITH
SCENE SAFETY AND TRAFFIC CONTROL!