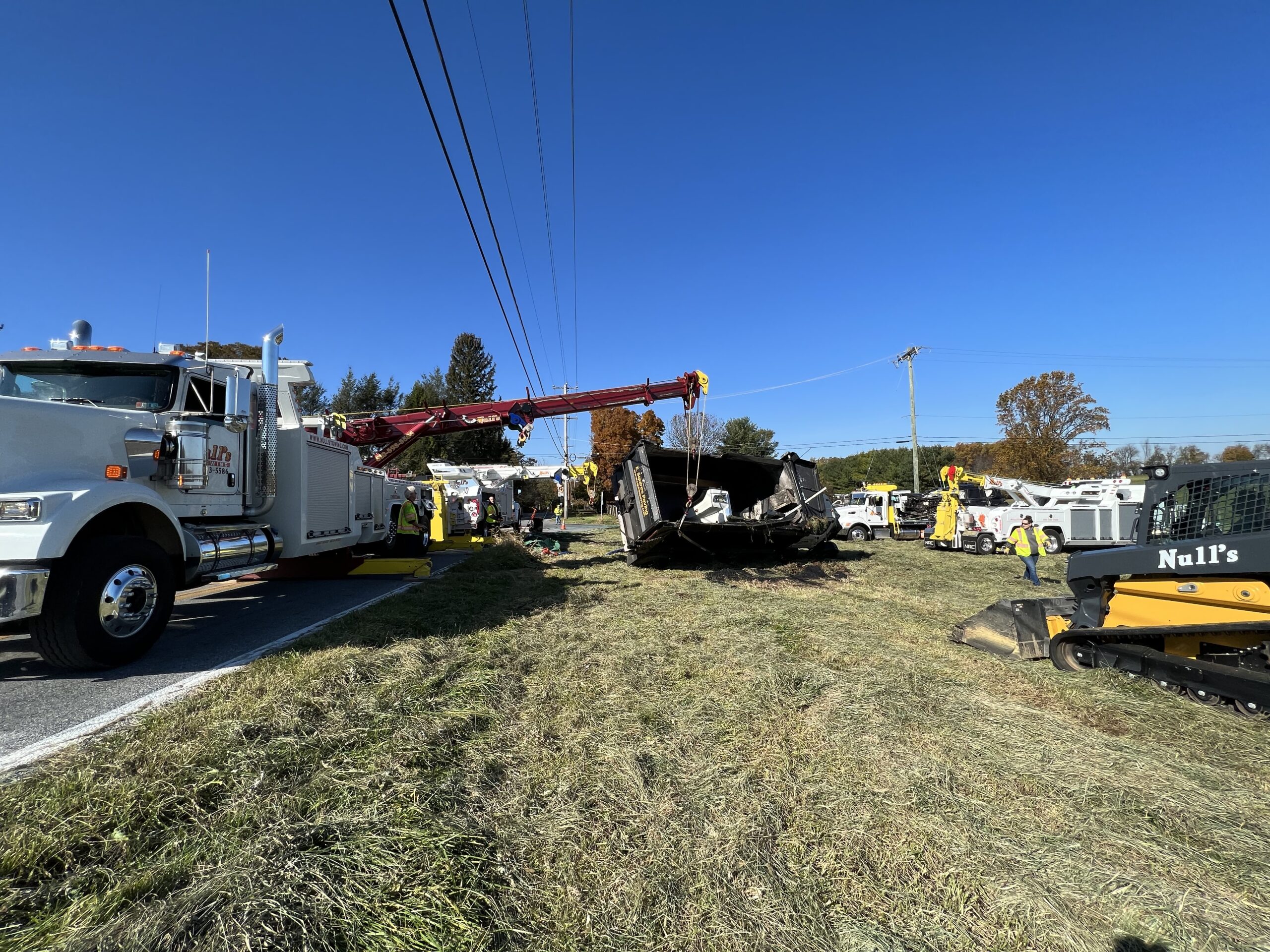 Contacted to respond to Route 842 and Route 841 in West Marlbourogh Township for a Toyota Land Cruiser and a tri-axle dump truck that were both involved in a collision and both reported to be overturned. We were advised that the dump truck was carrying a load of blacktop prior to overturning. We were also advised that there were fluids on the roadway.

Based upon the information we were given, we dispatched a recovery supervisor, two of our heavy duty sliding rotator recovery units, our skid steer loader, a rollback for the Toyota, and contacted Null’s Recovery & Site Restoration to respond with their roll-off trailer to load the load into, their Incident Response Unit for the spill, and their traffic control truck to assist with securing the scene.

The SUV was laying on its driver’s side with major damage. The dump truck was off the roadway, down a small embankment, under wires, and laying on it’s passenger’s side. The dump truck suffered major damage as well. There were fluids actively leaking from the truck, which NR&SR worked to contain. The truck’s partial load of asphalt had spilled out into the field. The field had just been mowed for the purpose of bailing the crop to be used for animal feed. The truck’s front axle was knocked completely loose.

It’s as determined that in order to reduce the amount of damaged caused to the field that one of our heavy duty wreckers be dispatched to the scene so that it would be able to access the field and hook to the front of the truck and carry it out of the field rather than the truck being winched out of the field, dragging the front end, causing major damage.

Once the truck was upright, the rigging was removed and the rotators were returned to travel position. The heavy duty wrecker hooked to the front of the truck and moved it from the immediate area so that clean up of the spilled fluids could take place. Our skid steer worked with NR&SR to clean-up the scene.

We met with the property owner who advised that the clean-up work that was done by Null’s Towing and Null’s Recovery & Site Restoration was satisfactory, he stated that the field looked better than what he expected it to based upon what he had originally saw at the crash site.

The damaged dump truck was transported from the accident scene to Null’s where it was placed in our secure storage yard.