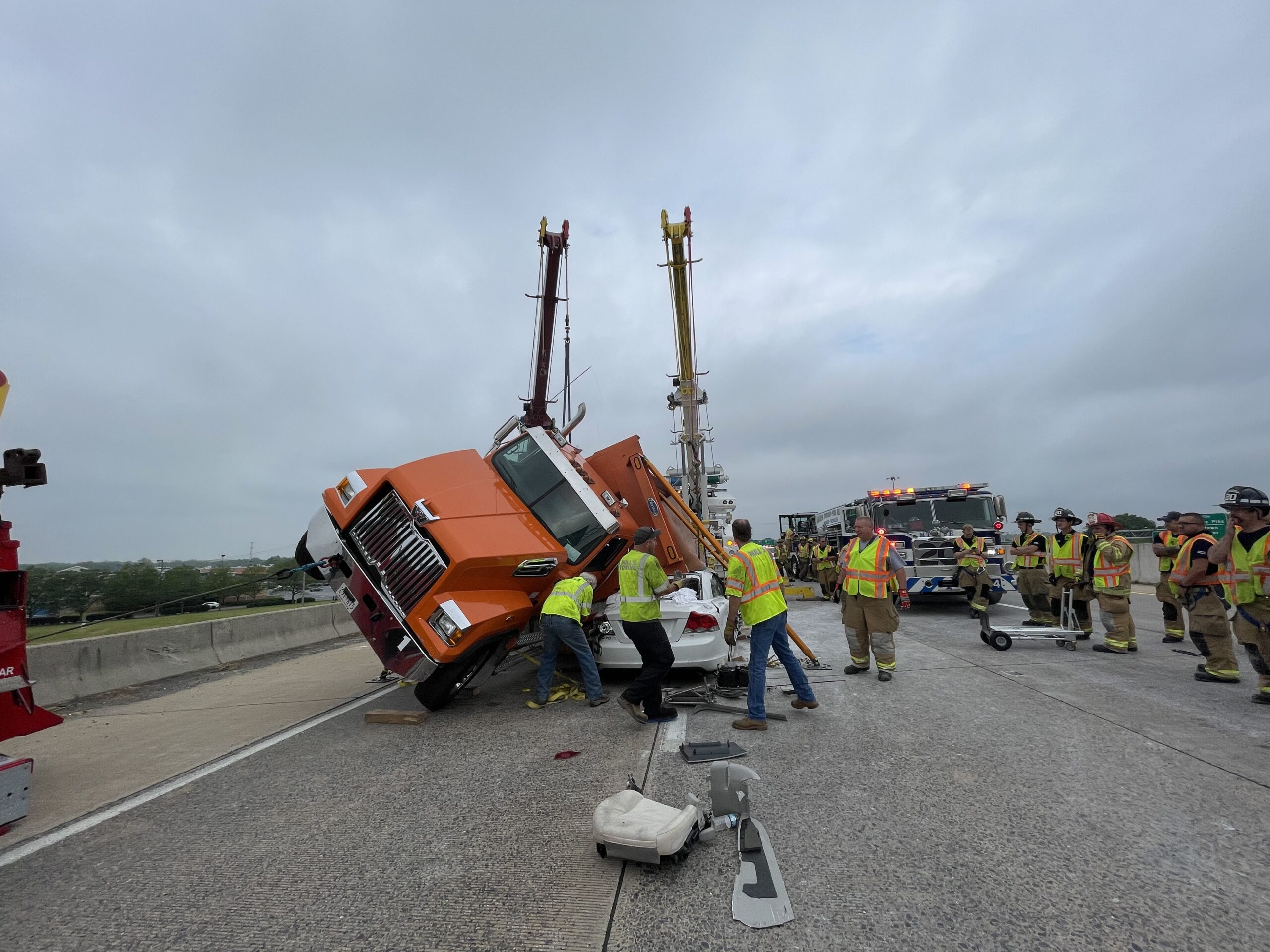 Contacted to respond to Route 30 eastbound at Fruitville Pike in Manheim Township for what was originally reported to be a tractor trailer accident involving multiple tractor trailers. We were advised that multiple rotators were being dispatched to the scene from both Null’s and Cocker’s Towing. We were advised that we would need to access the accident scene by travelling westbound in the eastbound lane of Route 30 from Chester Road.

Based upon the initial information we were given, we dispatched two of our heavy duty sliding rotator recovery units, a truck tractor, and contacted Null’s Recovery & Site Restoration to respond to the scene.

While enroute to the scene, we were advised that it was actually a dump truck loaded with stone that was overturned on top of a car with the operator of the car trapped inside the car. Based upon the additional information we were given, we dispatched our skid steer loader and street sweeper to the scene. We also requested that NR&SR make arrangements for the spilled cargo to be transported from the scene.

Upon arrival we met with the incident commander from both the police side and fire side. We were advised that Cocker’s, that was initially dispatched to the scene along with us had been recalled, however Garden Spot Towing was onscene. It was determined that Null’s would take the lead on the recovery of the dump truck and cargo with the assistance of Garden Spot and that Garden Spot would handle the tow of the car from the scene.

The scene was surveyed and it was found that the eastbound loaded Western Star four axle dump truck and an eastbound Volvo sedan were involved in a collision. The collision caused the Volvo to be spun around from the passenger side of the dump truck to the driver’s side of the dump truck and was now facing westbound in the eastbound lane. The dump was overturned onto it’s driver’s side with the Volvo under the loaded bed of the truck. Part of the load had spilled out of the truck onto the car and the roadway. The fire department had just finished extricating the driver of the Volvo who had been entrapped in the vehicle as a result of the dump truck overturning on top of it.

It was determined that due to the dump truck being overturned on top of the elevated highway portion of the roadway that extreme care would have to be taken to ensure that the ground pressure being placed on the surface of the road surface was kept to a minimum to ensure that the elevated roadway was not damaged. Additionally, the loaded dump truck was being supported by box cribbing and struts that were put in place by fire rescue so that the body of the car could be cut away to free the driver. The weight of the dump truck would have to be taken off of the cribbing and struts very cautiously to avoid any shifting and to avoid causing any damages to the equipment.

A recovery plan was established to utilize one of our heavy duty sliding rotator recovery units to lift and support the loaded dump body. Our second heavy duty sliding rotator would be used to lift and stabilize the back half of the chassis. Garden Spot would be utilized at the front end of the chassis to stabilize it. Once all three trucks were rigged to the dump truck, it was slowly lifted enough to free the fire rescue’s equipment. Our crew assisted the fire rescue crews with removing their stabilization equipment and returning it to their apparatus.

The three wreckers worked together to lift the dump truck the rest of the way off of the car and slowly lower it back to an upright position to avoid any shock loading of the elevated roadway surface. Once the truck was back to an upright position, Garden Spot was able to remove their rigging and cleared the scene. One of our rotators was returned to travel position. The second rotator held the dump truck upright while the load was shoveled back to a more level condition as the truck was still severely leaning towards the driver’s side.

Once the load was re-centered, the second rotator was able to disconnect from the dump truck. All of the rigging that was utilized was inspected and returned to it’s respective location. Both rotators were returned to travel position. One of the rotators hooked to the front of the still partially loaded dump truck and prepared to tow it from the scene.

Air was supplied to the truck’s air system to release the brakes. Remote braking device, towlights, and secondary attachments were all installed. The truck’s driveshaft had been disconnected prior to being uprighted. Our crew remained on scene assisting with getting the load and fluids cleaned up from the roadway.

Once the roadway was cleared, our crews and equipment cleared the scene. The truck was transported from the accident scene to Null’s of Cochranville along with the driver. Once at Null’s, the truck was placed in our secure storage yard.

A HUGE thank you to all of the agencies on the scene of this incident for their hard work to get the roadway re-opened as quickly as possible!